Get yer sporrans and kilts out for the Highland Games! If you're up for big belly laffs and hilarious team challenges on your Amsterdam stag do, you're onto a winner with this one. Split the group into teams and trounce the opposition in six games based on traditional Scottish events.

The Highland Games take place at a location a mere 25 minutes by car from the middle of Amsterdam. On arrival at the field, stag parties are supplied with wigs and kilts by professional Highland Games instructors. The field will be exclusively yours for the entire duration of the event. Fancy dress is pretty much mandatory for this one, folks. Going commando? Not so much.

Although we're sure you lot will stitch up the stag on that front!

The Golden Haggis Award is up for grabs so there's everything to play for. Grunting and roaring is the order of the day as you hurl wellies and toss cabers in a bid to be declared champions. It's all about brute force. This is an excellent choice for the Saturday afternoon of a stag do in Amsterdam.

Pick from one of our Amsterdam stag party Activities below 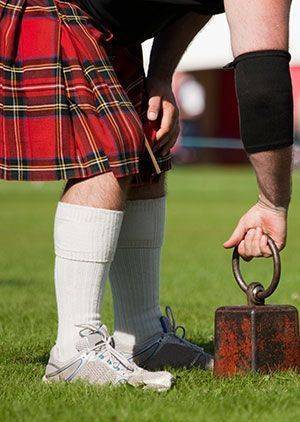