Level the playing field (literally!) with an afternoon's bubble football! The ideal activity for the stag party that wants to have some fun after an evening on the lash in Bournemouth's billions of bars and clubs, bubble football combines a good old fashioned kickaround with the silliest stag action you've ever seen.

Think Subbuteo gone mental. You'll be squeezing yourselves into inflatable Zorbs, which only leave your legs free below the knee, and attempting to have a game of five a side. The ref keeps order (when he's not laughing his ass off at you lot trying to pull off a Cruyff turn wrapped in air-filled plastic!), there's a proper pitch and regulation halves - but that's where the similarity to a serious game ends! Try maintaining a tiki-taka footie style when you're rolling around like a Weeble with your feet flapping in the air!

Bournemouth's as much fun for a stag party when the sun's up as it is at night. Don't relegate the boys to spending a whole weekend in the pub - break up the bar-stool mayhem with some unforgettable pitchside antics. The groom will love it, everyone else will too, and you get the added bonus of seeing the lads who usually show everyone else up floundering about like novices. Best man 1, rest of world 0! 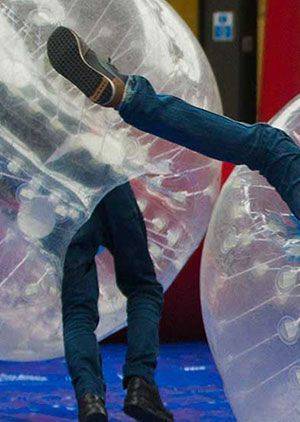