Unleash your inner crusader with this epic shooting package! We've combined some of the best medieval target-trouncing activities you'll ever see with a classic assault rifle pack, for a stag party winner that hits every bullseye known to man.

Your afternoon of medieval madness begins with an axe throwing session. Pick a Game of Thrones name, roar like a true barbarian and hurl your throwing axe into the traditionally-designed target. Then it's back to the 21st century for a blast on the assault rifles. None of your namby-pamby target shooters for you lot: these are the genuine article, deadly military weapons you'd normally have to go to Eastern Europe to get your mitts on. Thanks to a special license, you can blast the living daylights out of targets with automatic MP5s right here in Bournemouth!

If you thought that was fun, wait until you try the next action-packed item on the list! Not content with just teaching the boys on your stag party how to fire a bow and arrow like Robin Hood, we've arranged for you to hit targets that actually explode! That's right. Score a direct hit, and your paper goes up in flames. Amazing.

After all that axe throwing and bowstring pulling, even the strongest stag's going to get a bit tired. So we've saved the least taxing form of attack for last. Pick up your crossbows, gents, lock in the quarrel and pull the trigger. Then take your barbarian warriors off for a well-earned pint! 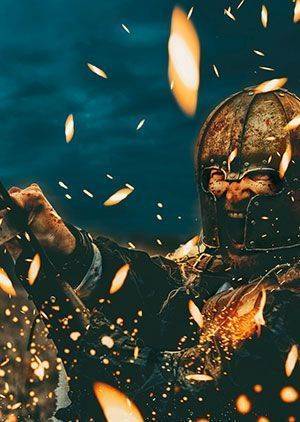