In 2020 this event will be Total Knockout, the ultimate mash up of It's a Knockout® and Totally Wiped Out. Bringing you the best 3 games from each event!

Win the South West champions title on your stag weekend! Stag v hen It's a Knockout in Bristol is the definitive battle of the sexes. We're talking foam, wet sponges, bouncy castles, giant costumes, hilarious relay races and slapstick action. Round up the boys, pick a funny team name and go for glory.

This is the genuine article, folks. The original BBC It's a Knockout features the games, costumes and inflatables used in the classic TV show. Don terrifying oversized beardy king costumes, flail around inside a big rubber dude and try to knock down the hen of your choice whilst hampered by a very odd vinyl getup. Accept no substitute!

Charge up the slippery summit slathered in foam. Run across moving carpets in a 10ft giant costume. Get involved in penguin sumo. There's no other event quite like this.

Great fun and brilliant for banter, It's a Knockout is the king of team tournaments. Will your stag party win the bubbly or the booby prize? Speaking of which, are you going to let yourself get trampled by a kickass team of on-it hens?

Duration: half-day Availability: It's a Knockout Bristol runs on Saturdays from April-October. 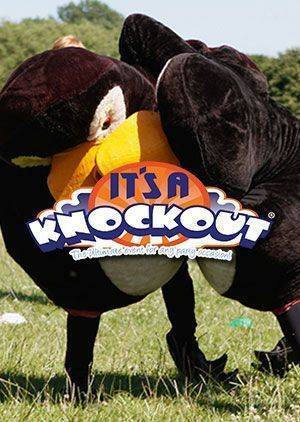