The sport of kings is as fine a way as we can think of to spend the Saturday afternoon of your stag do in Budapest. Study the form guide, pick your nags and let Lady Luck do the talking. We're taking you to the races!

Budapest's race course is just the ticket for a stag weekend. A stadium full of history and hotties, it's the perfect place to spot local fillies on and off the course! Swill a few botts of champers, and don't forget the cigars. A day at the races is all about seeing and being seen. And getting drunk as lords while you shout yourselves hoarse at the thoroughbreds, obviously.

Get your horse racing afternoon off to the perfect start with beers for the boys. While you get frothy with fine Hungarian lager, your guide will introduce you to the course and spill the inside beans on form for the day. If you need help placing your bets, she'll cut through the red tape and make sure you're putting your shirt on the right gee-gee.

It wouldn't be a Budapest stag do weekend without something a little different. Budapest's primo horse racing stadium is set up for chariot races as well as standard flat racing. Watch in awe as mentalist Hungarians fly round the track in modern versions of Roman racers! 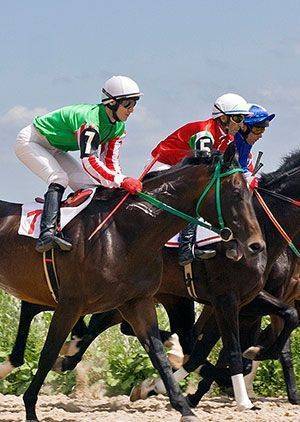