Beer and bikes don't always go together-but when they do, it's a marriage made in paradise. Like gin and tonic, or burgers and chips. Lads, welcome to the greatest sightseeing tour in the history of Hamburg!

Pop a beer bike session on the list for your stag party in Hamburg, and you get the best of both worlds. We're talking about a guided journey around the city's finest tourist spots, plus 20 litres of beer to drink while you're seeing them.

That's right, fellers. The beer bike is basically a moving bar, which you power by pedalling (the pedals are on your bar stools). There's a 20-litre keg on board to soften the blow of all that exercise, and a sober driver up front who controls where you actually go. Visit the most important sights in Hamburg, pull beer for the boys, and raise a glass to the passing strangers!

If you're worried about giving yourself a heart attack, don't be. The pedal system on the beer bike is clever enough to take most of the strain out of making the thing move. All you really have to do is drink beer and look at stuff!

This is a great alternative sightseeing activity for a stag party in Hamburg: a little bit active, a little bit unusual, and a whole lot of fun. The lads won't feel they've missed out on valuable beer time, and the culture vultures get to experience the best of the city up close. Epic.

Pick from one of our Hamburg stag party Activities below 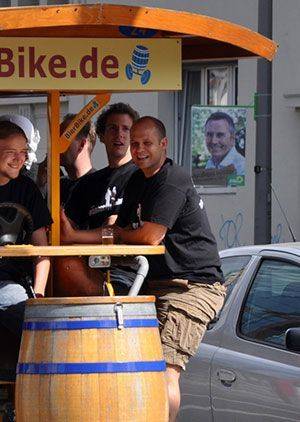