How about this for an epic stag do: indoor paintball at a demilitarised nuclear bunker in East London! Located near the banks of the River Thames, this place looks like something out a futuristic sci-fi flick or video game. Is there something nasty lurking down there? Only one way to find out. Suit up and dive into deepest, darkest subterranean London!

Your mission, should you choose to accept it, is to save London from a devastating nuclear attack. No pressure, then!

On arrival at the indoor paintball centre, your stag party will be ushered over to bunker HQ, where you'll be turned into special ops soldiers from the future. Get your hands on some pretty serious kit, including rapid-fire markers, armoured gloves and specially formulated paintballs that minimise bruising.

This is some of the most impressive indoor paintballing in the whole of the UK. The bunker has some excellent themed areas, including a loading station with burned out vans, mission control room, and a secret missile launch area. Can your elite ops unit reach it before the clock runs down to zero and the missiles unleash hell on the capital? 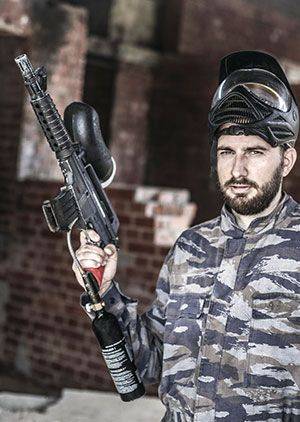