Battlezone Archery is the ultimate break the ice activity for bonding and firing up the killer instinct and getting you in the Madchester spirit.As the name suggests, you fight to win a battle with bows and arrows. Only the arrows are modified with rubber tips that absorb the impact of a shot. Face masks are also issued. Body padding is available if you want it, along with guards for arms and fingers. No damage done to the groom on the stag (not in this activity at least!), so the bride will be a happy bunny.

This is a battle of many parts. The instructors will mix things up to keep you on your toes. Battlezone Archery isn't just the name of the event but a game in itself. You can either hit all the players on the opposing team or their cones to win. Other games include the sort you play in paintball and dodgeball. Attack and defend is one, and there's a dodgeball-archery hybrid in there that'll really get the adrenaline going.

Got a lot of guys coming on the Manchester stag? Battlezone Archery can be run to suit medium and large groups. Instead of competing to win a match you can have a tournament made up of rounds. Teams get knocked out and others move up until you get to a final. 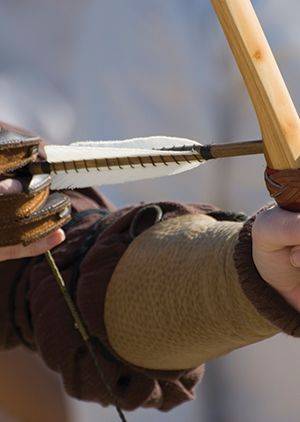