Want to give the big man a killer Manchester stag weekend? Go hovercrafting. Or hovercraft racing to be exact. What could be more fun, hilarious, or downright berserk than racing giant air cushions over fields and marshland? Leave the trams and trains of Manchester behind and take actual hovercrafts out for a burn at a site a mere half hour's drive from town. You need to do this, it's amazing!

Laugh 'til the tears roll down your cheeks and your face aches. Swear as you spin out of control. Feel the rush of flying across grass and smashing soggy terrain. Hovercrafting makes a Manchester stag weekend memorable. The stag might not remember much about a bar crawl of the city centre, but he won't forget hovercraft racing in a hurry.

It doesn't matter if none of the lads have done hovercrafting before. Instructors are on hand to show you how to get these massive air bags to start, stop, and turn. Get into teams of two or three and let the races begin. It's all about team work. Get your heads together and crush the challenge. Bragging rights will be yours! 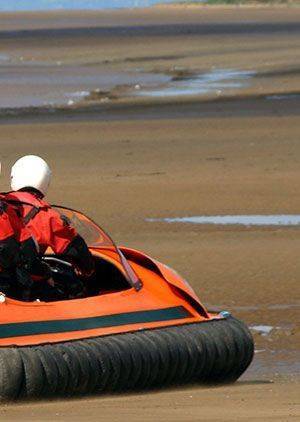