Smash 18 holes of footgolf at a lush green course a stone's throw from Nottingham city centre. A genius blend of the beautiful game and golf, this is the new sport that's rocking the stag party scene in 2015. Boot the ball into the super size holes on the course using the least number of shots. There are obstacles and frustrating sand bunkers that'll have the lads throwing girly strops left, right and centre!

You don't need the skills of a Nottingham Forest forward or a zero handicap to get involved. Stag parties of all abilities can have a bash at footgolf. It's a bit like a kickabout, only on a golf course so there are challenges to keep things interesting. Have a go at getting a hole in one and tick the stag do sports box without breaking a sweat or a leg.

Just what the stag doctor ordered after a swanky night out in Hockley or a messy one on Old Market Square, 18 holes of footgolf will have the boys back on form faster than you can say: 'Ey up mi duck!' Speaking of which, you'll be spoilt for choice when it comes to selecting a 19th hole. Nottingham is stuffed with boozers, including the legendary Ye Olde Trip To Jerusalem, England's oldest pub. 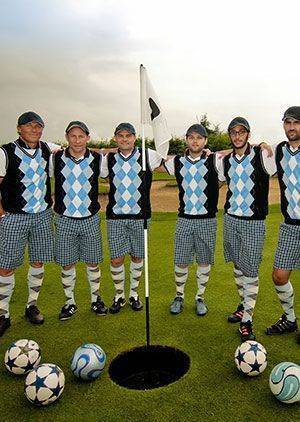