Your Sheffield stag party is more than just a chance to drink epic beers on West Street, or go clubbing in one of the cities that founded the UK rave scene. It's also an opportunity to leave the modern world behind, and venture underground - and 300 million years into the past!

Caving is one of the most epic stag party activities we've ever done. It's not for people with claustrophobia though! Once you get under the surface of the earth, you'll be confronted with tiny spaces and insanely tight crawl-throughs.

Don the hard hat and waterproof overalls, strap a head torch on, and follow our expert guides deep into the heart of the earth. You'll be exploring an incredible cave system beneath the Castleton/Hathersage area of the Peak District.

Wade through underground rivers. Wriggle between columns of rock and burst into impressive underground caverns. Discover stalactites and stalagmites that have never seen the light of day.

If you're arranging a Sheffield stag party for a groom who loves the great outdoors, this is an adventure you can't afford to miss! It's a great introduction to the sport of caving, and an experience the lads will be talking about for days afterwards. Are you ready to go underground? 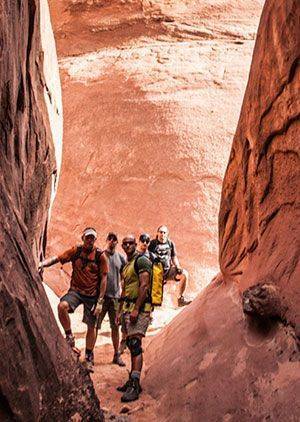