Looking for mind blowing Tenerife stag do ideas? Flyboarding will give you a little taste of what it's like to be a Marvel or DC super legend! Strap your feet into a pair of jet boots and actually hover above the water. You've seen it on TV and YouTube, now it's your turn to be a badass. You'll be picked up in front of the most popular bars or meeting points in Las Americas and taken to the flyboarding point for the ride of your life. Everything you need is provided, just turn up and do it.

Move over bungee jumping! When it comes to amazing Tenerife stag do ideas, flyboarding is top dog. It's definitely a bucket list experience and will give you the biggest buzz ever. You'll be kitted out with the boots and briefed on what to do before you head out on the water. When you're out there and the time's right, you'll shoot straight up in the air and then hover there. You won't be able to believe it's actually happening! After you've got used to your jet boots, move around a little and have some fun with it.

Get your names down for the ultimate rush! Add flyboarding to your Tenerife stag do and it will go from standard to epic.

Pick from one of our Tenerife stag party Activities below 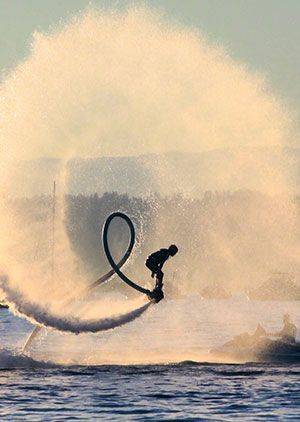